Hi readers - This is a post I must admit to having written at least a half dozen times over the past 12 months. I have never had the time to do it right, which is why it has not been finished until now. I hope you find some value in it. Full disclosure: I own a position in Nokia and plan to own a position in Nokia for some time.

In a volatile market it is hard to know where to put your money. It is especially hard to be certain when to make a big play on a particular stock or two. For the past several months I have been chastising myself for being far too conservative when I came across stocks that struck me as no brainers. Such examples being, BofA right after the crash when it became clear the Feds would never let it go bust and BP after the gulf spill when the market reaction was way over blown and the stock way over sold. Both of those stocks turned out to be great buys however I did not invest enough to really take advantage of the opportunity.

Nokia struck me as another such no-brainer opportunity. I have been watching the stock for several years and have owned the shares several times over the last 7 years each time making a healthy return. Nokia is currently going through a painful restructuring and as such the stock has been badly beaten up. At the current price, I believe there are few stock opportunities out there that are as attractive. Let me explain why.

1st: Distribution and Manufacturing
Nokia is a world leader in feature phones (still the dominate phone globally sold today)with a world class global distribution network and a very strong presence in the fast growing emerging markets including a dominate position in China (19.1%) (next closest is Samsung with 8%) and India (37%) Nokia is a manufacturer with global economies of scale and can produce phones at a price only Samsung can match. Nokia's feature phones carry a 10% profit margin and are regularly priced 40-50% under their closest competitor. Nokia phones have over the years developed a very strong global reputation for build quality and durability, critical purchasing criteria if, like much of the fast growing developing world, a person can only afford one mobile phone every few years. Nokia is the safe, reliable and trustworthy choice.

2nd: Experience and Brand
Nokia has been a world leader in mobile communication technology for over 20 years. Nokia defined the feature phone category and was a consistent innovator in both features (remember snake) and design (remember the Nokia 9200). Let's not forget that before IOS and Android it was Symbian that was the OS of preference for app developers and smartphone manufacturers. Symbian still has a huge global footprint despite being all but abandoned by most manufacturers. The point here is that Nokia has deep experience in the mobile market and has created category defining products again and again.

3rd: Turnaround and Management
Over the last year Nokia has embarked on a major strategic shift, abandoning Symbian for future smartphone development and embracing a partnership with Microsoft centered around Windows Phone. This is, in my opinion, a brilliant strategic move. While the decision to not go with Android received a tremendous amount of second guessing, I believe it was the right decision. Android is a poor platform. I have been a smartphone user for almost 10 years now, having started with early Windows Mobile devices and recently having several Android devices. Android reminds me of all of the problems with Windows XP. Nothing seems to work easily. Android requires a lot of management to keep it running smoothly, the platform has massive system fragmentation issues and suffers from way too many undifferentiated, boring phones. Furthermore, Microsoft's strategy of demanding royalties from Android phone manufacturers has successfully driven up the cost to manufacture each Android phone by an estimated $10 or more. This is/will dramatically change the underlying economics behind low-end Android device manufacturing. This is great news for Nokia because low end Android phones have significantly eroded Nokia's feature phone margins and global market share. 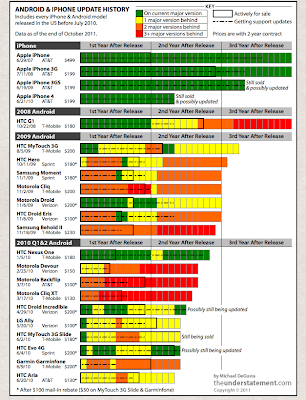 Windows Phone is different (I won't go into all the ways here, I have provided many links below that go into why Windows Phone is a good OS) it is clean, simply, effective and easy. Sure the app market is not what IOS and Android is but it has the really important apps and is getting better all the time. The growth of the Windows Phone App Marketplace has been tremendous growing to over 60,000 Apps since Oct 2010. Below is a chart that outlines the Apps Marketplace growth. 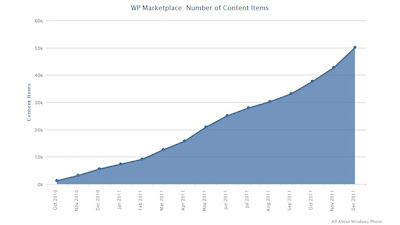 Given that the hard decision was made less than 12 months ago the turn around strategy has been executed with stunning efficiency and capability. In less than 12 months Nokia has jettisoned 7,000 employees to Accenture , fully transitioned to Windows Phone for their smartphone platform, released three different smartphones across all price points and launched a global marketing campaign including a $200m campaign in the U.S. with Microsoft and AT&T. The phones Nokia released are great looking and absolutely differentiated from everything else on the market. 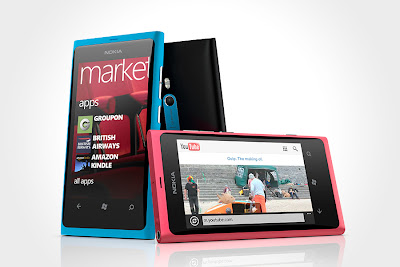 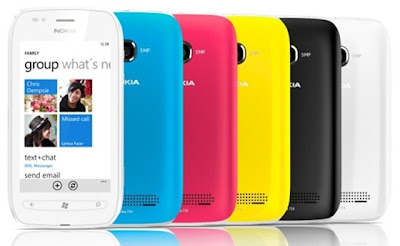 4th: Value and Dividend
As of 1/23/2012 Nokia currently trades at $5.74 per share having just bounced off a multi-year low of $4.40 per share. This share price gives Nokia a valuation of $21.5B. Nokia currently has a $7B net of debt cash position. This means that the whole of the Nokia organization including global manufacturing facilities, distribution network, brand, real estate and IP portfolio is valued at less than $14.5B. To me this makes Nokia an amazing value! Nokia, in my opinion, has been way over sold and is undervalued based upon the to date success of the turn around strategy and company's assets.

The real reason why I think this is a fool proof trade is this: The shares represent an extremely good value as explained above. This is clearly a bet on the turn around strategy, which, in my opinion, is well thought out and has been even better executed. The company currently offers close to a 10% dividend rate meaning that should you need to ride these shares as the turn around takes place you will be well paid for your risk. Should the turn around not pan out as hoped at this price the stock is well placed for an acquisition with Microsoft being the best and most likely acquirer. Since you are being paid 10% to park your money in Nokia you can afford to wait for any of the likely scenarios. Should the turnaround succeed this is a $20+ stock in a year! All of these things add up to what I consider one of the best trade in the market at the moments. As always, there is risk to any trade and do your own research and invest based upon your own needs but for me this is a truly a no brainer.


More info on Nokia below: 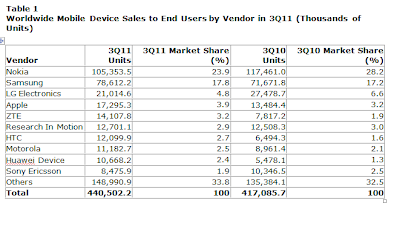 Top reasons why WP7 / NOK will eventually own 34% of the world's market. Educate!

1) People are addicted to the best software, what makes the best software, a component market, one WP7 already has. [Bing: "silverlight components" for your proof of the market within the market] Signs of things to come. More developers know Silverlight than anything else. The development tools are the best, MS is fostering the app world the best, Impressive apps are being built in just weeks. Exercise [YouTube "Silverlight Windows Phone 7" for thousands of examples.]

2) You might not know this, "Windows Phone 7 growing faster than Android and IOS", link taken straight from the word of Android. [http://androidheadlines.com/2010/12/shoc...] another link
[http://www.mobileburn.com/news.jsp?Id=13...]

3) MS has aligned with ARM/Nvidia/QualComm/TI. NOK will benefit from this alignment along with Microsoft. Mobile devices and Windows technology will exist heavily in the near future.
[read http://www.microsoft.com/presspass/press... and then bing search more on this topic]

4) Microsoft's Ecosystem dwarfs all others. Microsoft is literally a small solar system at the center of the galaxy representing the size of their ecosystem. Markets within markets within markets, within markets revolve around Microsoft. The total Marketcap of all companies tied to MS technology is absolutely mind boggling. [review https://partner.microsoft.com/US/3000010... which is a huge site, but just a tiny fraction of the total ecosystem, especially if you consider everyone using Word/Excel/Powerpoint/SqlServer/IIS/etc, etc]

5) MS is putting tons of resource into WP7 as it will be the catalyst to BING's search engine becoming a money-for-nothing scenario. NOK is getting paid to use a system they would have eventually migrated to. NOK will bud into the tablet PC market with a cost advantage. "Microsoft is going to spend $9b in total R&D this year and last year’s Windows Mobile OPEX was $0.9B (R&D, sales and marketing) so I expect this year’s OPEX to be around $1.4B." This was written in March when it was announced MS was spending 1 billion in WP7. Plus NOK deal + ARM deal = money, plus (millions of developers + plus ease of development = massive app growth), plus superior hardware, plus celeb advertising$ = SMASH HIT.

6) The NOK/MSFT venture has been in the works for years. Hardware will result shortly. [http://timesofindia.indiatimes.com/tech/...]

8) XBoxLive is a huge gaming platform. At any one time a million could be playing. Love Call of Duty! MS has made making games for WP7 and making these games live, very easy. Why play a game on your phone against a stupid ai, that's so ancient, play against other humans, nothing is more fun.http://www.electronista.com/articles/10/...

9) Go use a WP7 phone for a few days. Samsung Focus is nice. It really makes all other OSs look outdated and basic. After using a WP7 phone for a few days, your impression of other phone OSs is ruined. Sure there's a few things missing, but coming soon. I love this video http://www.youtube.com/watch?v=qUO51jMGi... I can delete my spam emails in seconds on my WP7 that took minutes with IOs. My WP7 interfaces with my car to read my text messages, something I never got IOs todo.
Posted by Even W at 4:05 PM 1 comment: