When I started the research for this post I believed I would find that there was a positive correlation between the amount of banking regulation and the number of bank failures.  What I ended up finding was the exact opposite. Now being a rational person I must accept that my first, small government inclination, was wrong at least as far as this data is concerned.

Now keep in mind that the pre-great depression period was unique in that it was really a wild west scenario.  That said, I looked back to into the data from 1890 up until 2010 for the below chart.  The data was hard to come by as there was no single source, that I could find. I pulled this data together from various sources so please understand that the finding are not 100% fact.  As far as the data involved, I believe it to be 95% accurate. 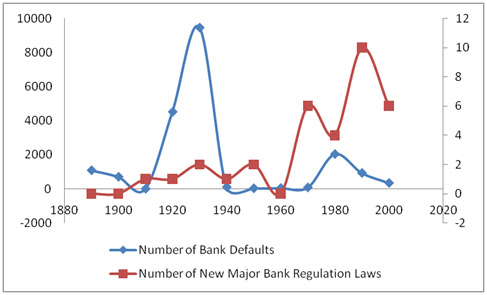 It appears that there is a strong correlation between banking regulation and a decrease in the volume and frequency of bank failures.  The one unmeasured variable here that would/could significantly alter the judgement this chart provides is the total number of banks. I did built a secondary chart, however I was unable to find reliable data from 1890 through 1920, so the value of the second chart is limited. 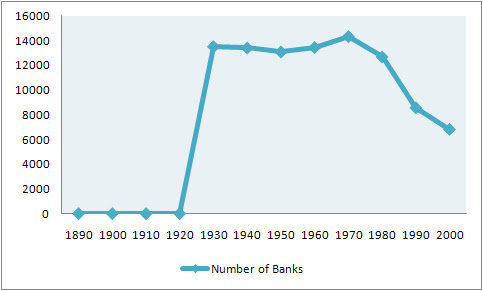 While I would not have expected this outcome I have to admit that my opinion of the value of a regulated banking industry has changed.  Now from a political and economic philosophy I am in favor of regulation as it does seem to work. That said I would prefer that regulation did not confer responsibility for failed banks.  If a bank fails it is my opinion that it should be be liquidated with shareholders wiped out.  Depositors should be made whole according to FDIC guidelines.  I firmly believe that another bank will either spring up to meet the now unmet need or an existing bank will jump into fill the void.  I am firmly in favor of not allowing banks to get so large that they represent a significant threat to the U.S. and global economy.   Interesting findings non-the-less and my mind has been changed with regard to the value of banking regulation.
Even

Citations:
U.S. Department of the Treasury. Annual Report of the Comptroller of the Currency (1931), pp. 6, 8
http://eh.net/Clio/Conferences/ASSA/Dec_90/Alston-Grove-Wheelock.shtml
http://www2.fdic.gov/hsob/HSOBSummaryRpt.asp?BegYear=1934&EndYear=2007&State=1
http://www.fdic.gov/bank/individual/failed/banklist.html
Currency – Friedman and Schwartz  1963
Board of Governors (1937)
Posted by Even W at 2:40 PM