Below I have posted an excellent analysis of the situation surrounding global currency issues. I find Merk Investment's analysis to be spot on.  It does not address how and why China should revalue it's currency, which in my opinion must happen, however it deals more specifically with the consequences of a rapid revaluation on American corporate profits and global economics stability.  Well worth a read.  Enjoy!
Currency Manipulation: Two Sides to Every Coin
Kieran Osborne, CFA, Co-Portfolio Manager, Merk Funds
November 30, 2010

Recently, currency manipulation has garnered headline attention. We have been constantly bombarded with rhetoric out of Washington: “China isn’t allowing its currency to appreciate fast enough”; “China’s exchange rate policies are stealing jobs from America”; “We’re playing fair, why can’t China?” More often than not, the more vociferous proponents come from politicians who, in our opinion, are simply posturing for votes; attempting to provide catchy sound bites they believe will resonate with their constituents, without fully grasping the underlying fundamentals at play. The situation itself is truly paradoxical – akin to a major corporation thanking its largest creditor by insulting them.

The currency debate, just as every coin, has two sides. Let’s address each of the above concerns in turn, and what it means for you as an investor:
“China isn’t allowing its currency to appreciate fast enough”
Policy makers are continuously bemoaning the perception that China is not allowing its currency, the yuan or renminbi (CNY) to appreciate at a rapid enough pace. While we agree that the CNY is undervalued, and that the Chinese should allow the currency to appreciate to alleviate domestic inflationary pressures, we realize this won’t happen overnight, but at a pace the Chinese perceive to be in their best interests. What has not been focused on, however, is that it is in no one’s interest to allow the CNY to appreciate too quickly. Let’s assume for a moment that those politicians calling for a stronger CNY get their wish and the Chinese allow their currency to float freely overnight. What would be the likely consequences? Of course, there would be vast systemic implications globally, and at the risk of oversimplifying, let us touch on a couple of key points.

It would be a shock to the global system. Without question, volatility would rise. Businesses would have to factor in the added risks associated with a free-floating CNY exchange rate on future procurement expenses or translation of foreign earnings; overnight, the risks associated with future cash flows for any investment may rise substantially. When the risk profile rises, investment tends to be reduced. The last thing the global economy needs right now is a reduction in global investment, given the world’s economic recovery remains on unsteady ground.

By many estimates (ours included) the CNY is over 50% undervalued relative to the U.S. dollar. Exports out of China would increase in value overnight (in U.S. dollar terms), essentially an additional cost to be born. Chinese exporters would be faced with a choice: swallow the additional cost brought about by the currency appreciation, or export the cost to the end user – the Western consumer - you and me. We have already seen a similar dynamic play out in the spring of 2008. Before the recent financial crisis took hold, the cost of natural resources and commodities was soaring (oil reached $140 a barrel) and there were stories of large increases in exported goods from China. Coat hangers, for instance, were increasing some 200% in price. The reason? Chinese manufacturers could no longer absorb the rising cost of production brought about by the soaring price of inputs. Chinese exporters found that they had pricing power, and were able to pass these additional costs onto those buying the goods – the U.S. consumer. Should the CNY appreciate substantially, it is likely that a large portion of the increased costs would be exported to the U.S. consumer. Comparatively speaking, the spring of 2008 might look like a holiday in terms of price increases. Such an outcome, from a consumer’s perspective, would severely reduce purchasing power at a time when U.S. policies are not creating domestic jobs (no wage growth). It would produce significant headwinds against the floundering U.S. economy, and in all likelihood completely derail any nascent recovery.

In short, while much criticism has been leveled at the pace of appreciation, the reality is that the Chinese may be taking a much more prudent approach than what many give them credit for. Indeed, were they to allow their currency to appreciate too rapidly, it could put the global recovery at risk.
“China’s exchange rate policies are stealing jobs from America”
In our opinion, the above statement is a gross overstatement. Yes, at the margin, current jobs may be saved, but the jobs that have already left are unlikely ever to return. Should China allow its currency to appreciate, it is likely that these jobs will simply migrate to other low-cost producing nations, such as Vietnam or the Philippines. The U.S. simply cannot compete on cost. Put another way, can you envision the U.S. producing and exporting sneakers to Asia? No? We can’t either.

Yes, China’s undervalued currency has contributed to this issue, but it is by no means the sole reason for its occurrence. In our opinion, U.S. monetary and fiscal policies have acted as key catalysts behind the exodus of manufacturing-related occupations from the U.S. Over the past couple of decades the Fed helped create an easy credit environment, keeping interest rates too low for too long, while the government reinforced this trend, favoring policies aimed at subsidizing the U.S. consumer (and getting politicians re-elected), rather than policies that foster long-term sustainable economic growth.

As a consequence, these policies led to overconsumption in the U.S., and combined with an undervalued CNY, overproduction in China. The overproduction caused the price of raw commodities and natural resources to soar, while the price of imported goods into the U.S. remained low. Who was caught in the middle? Corporate America.
Corporate America’s margins were squeezed as the cost of raw materials accelerated, leading to increased levels of outsourcing. Indeed, it has been corporate America’s M.O. to outsource evermore complex tasks to Asia in an attempt to improve the bottom line. In many ways it became a reinforcing circle: as more jobs were outsourced, an environment of stagnant real wage growth was created; with stagnant wages holding down demand-driven profitability, corporate America’s response was to drive margin enhancement through multi-year cost-out initiatives (read: evermore outsourcing). The Fed and government responded with even more easy policies aimed at spurring consumer spending, all of which ultimately contributed to misallocation of investment and the recent credit crisis.

Rather than wasting valuable time and money bemoaning China’s foreign currency policies, politicians should focus on incentivizing much needed investment in intellectual capital, R&D and value-added goods. That has been the U.S.’s strength historically: inventing and pushing the boundaries of human exploration. The U.S. needs policies that support such investment if we are to enter a sustainable economic recovery. Sadly, most politicians would rather blame others for the present economic quagmire we find ourselves in.

Are we really? In our opinion, the U.S., or more specifically, the U.S. Federal Reserve (Fed), is in many ways playing a similar game. But the Fed’s game may be to devalue the U.S. dollar by stealth. Whereas the Chinese are openly undervaluing the CNY by allowing the currency to trade within a pre-defined band relative to the U.S. dollar, and have thus been open to greater levels of criticism, we believe the Fed is following a similar approach, albeit in a much more esoteric form via it’s monetary policies. The U.S might do well to adhere to the old saying “those who live in glass houses should not throw stones”. By driving down yields by purchasing fixed income securities, the Fed is implicitly overvaluing those same securities, encouraging rational investors to look elsewhere for less manipulated returns. The Fed has manipulated the market to such an extent that even yields in Japan have become relatively more attractive than those in the States (see Merk Investment’s analysis here). The real problem, however, is that through its policies, the Fed may get more than it bargains for, and risk losing its credibility in the process.
Indeed, not only high profile economists, but also the market itself, have called the credibility of the Fed into question. Bernanke got his wish: we have witnessed implied inflation expectations move up substantially post Bernanke’s Jackson Hole speech, where he first outlined the likelihood of another round of quantitative easing (QE2). Now, the market appears to be becoming evermore skittish over the negative impact inflation will have on fixed income investments, as evidenced by the strong uptick in U.S. Treasury yields subsequent to the Federal Open Market Committee’s (FOMC) QE2 announcement on November 3rd. In our opinion, Treasuries were significantly overbought leading into the announcement, which may be compounding this trend. This has occurred with a backdrop of Fed officials repeatedly stating that the program won’t create inflationary risks. The market clearly thinks otherwise. 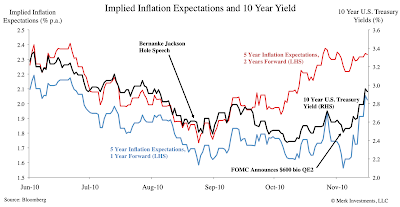 So what do these dynamics mean for investors?

Should we enter a period of protectionist intensification, those countries most at risk may be the ones that have opened up their economies to the global marketplace, those that have flexible exchange rates and current account deficits, such as the U.S. In such a scenario, investors may want to increase defensive positions and protect against the downside. Protectionism will likely curtail global growth, as it creates inefficiencies, increased risks and increased costs. If you believe there is a substantial risk that the Fed’s policies will substantially devalue the dollar, causing inflation to rise, then you may want to take this scenario into consideration with regards to your own allocations. We have been arguing for some time that we may be witnessing a bond market bubble in the U.S. (see Merk Investment’s analysis Bond, Junk Bond: A Casino Royale? and Searching for Yield: At Any Cost?). Given recent dynamics, investors may want to consider shifting out of longer-dated dollar denominated fixed income securities and into those that may be least negatively affected by increases in yields and may protect against a decline in the value of the U.S. dollar; international short maturity, high quality fixed income instruments may offer relative safety in such an environment.

Follow to read original article.
Posted by Even W at 1:27 PM