QEII is a targeted economic weapon aimed at China.


With QEII the discussion is always about inflation, how much inflation will the Fed's monetization of U.S. debt drive? I believe this discussion is misguided.  The question that should be asked is what is the real purpose of QEII?  I understand that domestic economic concerns are the pretense but if you look at the state of world trade it is easy to see that QEII is squarely aimed at China.  QEII is about forcing a Yuan revaluation or driving Chinese inflation to such a level that their export driven economy and asset bubble bursts.  QEII is a targeted financial weapon plain and simple.  Furthermore, if we look at the potential inflationary ramifications we see that inflation is the only answer the global economy has.  We cannot grow our way out of this current crisis unless a transformative technological leap is achieved.  Absent of this technological shift in the demand curve we must debase the value of the dollar in order to stabilize housing prices in dollar terms.

Finally, with President Obama's stated mission of doubling U.S. exports in 5 years we very quickly see this can only be achieved by devaluing the dollar and rebalancing trade globally with respect to China's oversized export economy.   Adding all of these factors up we quickly see that the debasement of the U.S. dollar and it's consequence, inflation, is a triple win, win, win for the U.S.  First inflation will stabilizes U.S. housing and end the deflationary spiral in the housing sector, second inflation drives U.S. exports thus creating a more positive environment for U.S. employment and third inflation will cause material harm to the U.S's nearest economic rival.  The economic unwinding of China's export/credit driven bubble will seriously disrupting China's long term strategy while causing serious questions to be asked of the so called Beijing Consensus.

The question then becomes will QEII really drive Chinese inflation and force a Yuan revaluation?  If we look at the official inflation statistics we see that inflation is in fact rising.  The side chart shows official Chinese inflation statistics.  It is important to keep in mind that these numbers are widely considered
inaccurate.  Food inflation it is said has been running at 20% for 2010.   Can the Chinese system absorb 5% or 10% inflation nationally?  Is the banking system capable of absorbing all of the Yuan denominated debt necessary to keep the Yuan pegged to the Dollar?  I believe not.  This is why I believe the Chinese must revalue the Yuan or face destabilizing inflation. 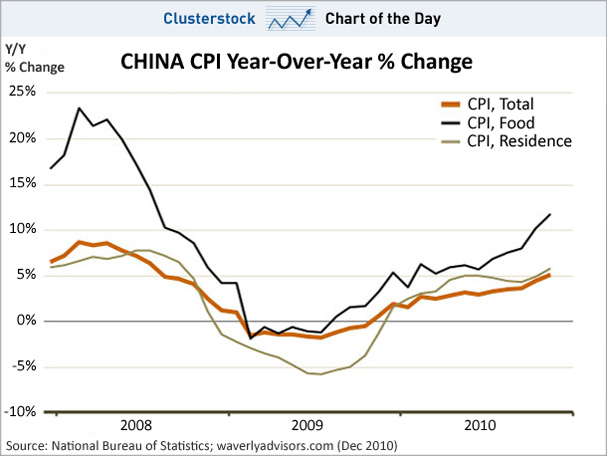 It is my opinion that the debasement of the U.S. dollar is a no brainer for the U.S.  The question as an investor is where to put your money to ensure you protect your wealth.  I have mixed and incomplete thoughts on this topic.  My opinion is that oil, silver and large cap U.S. and European multinationals with strong balance sheets and global reach will represent good stores of value.

Latest Chinese CPI Numbers:
http://www.tradingeconomics.com/Economics/Inflation-CPI.aspx?Symbol=CNY
Posted by Even W at 8:44 AM