How sad this is and what a stunning reversal and an ominous trend for the U.S.A. Washington D.C. now has the highest median household income. This is a city that produces no wealth, no goods and no innovation. The city only exists to make rules and regulations that destroy and confiscate the wealth of others. If ever there was a clearer signal of how off track the U.S. has become I would be surprised. 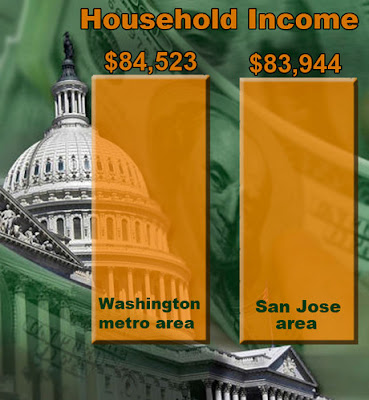 The U.S. capital has swapped top spots with Silicon Valley, according to recent Census Bureau figures, with the typical household in the Washington metro area earning $84,523 last year. The national median income for 2010 was $50,046.

The figures demonstrate how the nation’s political and financial classes are prospering as the economy struggles with unemployment above 9 percent and thousands of Americans protest in the streets against income disparity, said Kevin Zeese, director of Prosperity Agenda, a Baltimore-based advocacy group trying to narrow the divide between rich and poor.

“There’s a gap that’s isolating Washington from the reality of the rest of the country,” Zeese said. “They just get more and more out of touch."

In recent years Washington has attracted more lobbyists and firms with an interest in the health-care overhaul and financial regulations signed into law by President Barack Obama, according to local business leaders.

“Wall Street has moved to K Street,” said Barbara Lang, president and chief executive officer of the DC Chamber of Commerce, referring to the Washington street that’s home to prominent lobbying firms. 'Those two industries clearly have grown in our city.'"

MP: Considering that Washington has the highest median income in the country thanks to all of the lawyers and lobbyists, and all of the federal employees earning compensation that averaged $126,369 last year, OWS might have the wrong target. After all, it was government housing policies originating in Washington that contributed more significantly to the housing bubble, mortgage meltdown, financial crisis and economic recession than any greed on Wall Street.

Based on a new Gallup Poll (ht: Economix Blog), the American people understand this, and they are more than twice as likely to blame the federal government in Washington (64%) than financial institutions on Wall Street (30%) for the economic problems facing the U.S. How about: Occupy K Street? Or Occupy 1st Street SE?
Posted by Even W at 12:45 PM